So, perhaps the title of this post gave away my big reveal, BUT I PR’ed in the half marathon this weekend! While this is normally a cause for celebration for me (and anyone else, duh), I can’t help but be a little disappointed in my performance. I didn’t reach my goal of breaking 1:40, which admittedly, has gotten me feeling pretty down in the dumps.

I know a PR is a PR, but I’m 100% certain that I could’ve run better than I did. I went in with a frustrated and disgruntled attitude, much of which was my own doing. I did not prepare for this race in a responsible way. I have a very long list of things I would do differently. Some of which include:

But aside from my own poor rookie mistakes, the race was great. The course was nice and open (unfortunately this meant flying and dying for me), and the water stops were well equipped. Some runners complained that there wasn’t quite enough Gatorade available, but since I’m not a big Gatorade drinker lately, this didn’t bother me.

The weather was also absolutely perfect. I didn’t even think about the weather conditions until someone asked me after the race how it was. There were a few times I dropped water over my head, but I never got uncomfortably warm or uncomfortably cold (once I started running—before the race I was certain I was going to come down with hypothermia).

There were a few hang ups with transportation—a lot of traffic, the shuttles got a little lost, etc, but otherwise I didn’t run into any glaring problems with the race.

Some other fun things from the weekend:

We stayed at the Biltmore in downtown LA which is a super famous hotel. Plus, it was kind of pretty.

I had most of Saturday morning to myself while S worked and I waited for one of my friends to make her way to downtown. That’s when I stumbled across this delightful little crepe place. It was absolutely delicious, and I even made S go back there with me the morning before we left so I could get the Croque Madame for a second time. 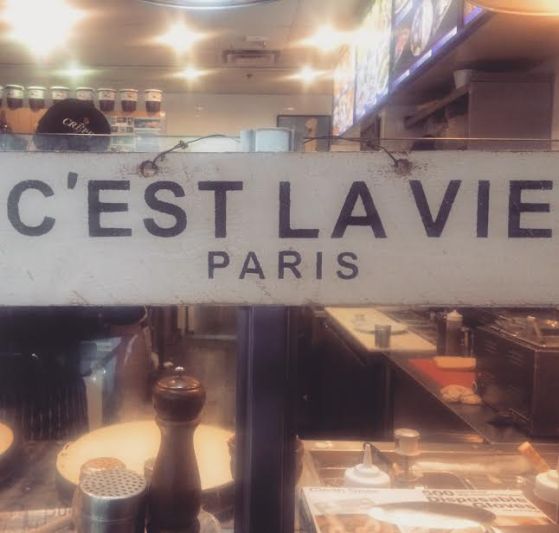 Later that day, I met up with my high school friend and her beau and they took me through Hollywood. I had never been so it was high on my to-do list this time. The highlight was without a doubt, Good Times at Davey Wayne’s. THIS was the door to the bar, and inside it was all 70’s themed. Plus, the cocktails were delicious.

Overall it was a pretty good trip, with a PR, excellent food and good company. Plus, we missed the first “real” snowstorm of the season, so I can’t complain about that. Next race I’ll just work on preparing a little better 🙂

It's rude to count people as you pass them... out loud

The Girl Who Ran Everywhere